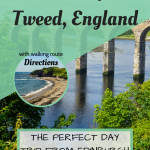 Continuing my solo adventures around Edinburgh. This time, I decided to head on a day trip to the nearby Berwick-upon-Tweed in England, the first stop of the train from Edinburgh to London. The views from the train ride were magnificent, so I wanted to spend more time in this beautiful town.

A walking route for a day trip to Berwick-upon-Tweed

The walking route for this day trip to Berwick-upon-Tweed covers the most important places of interest of the town. It begins by following part of the Castle Parks Trail (click here for the official map brochure) and then follows the medieval fortifications around the town with a short detour at the Berwick Lighthouse and the museums. A short stop at the town centre for lunch is also included.

Note: It was not possible to create a Google Map with directions to all the stops of the route, because some of the paths I took are not registered on Google Maps. Instead, I drew an outline of the walk on the image below. To get the Google Maps equivalent, click on the image.

Tip: Start the walk on a summer day at around 10 am to have time to visit the museums before closing time. To follow it in the winter, you may want to start your walk a bit earlier to have time to see everything during daylight. Bear in mind that the museums included may be closed.

The walk starts at the Coronation Park and continues onto Castle Vale Park via Tommy the Miller’s Field. Both parks were created in the 1930s and have a similar design. Upon entering the Coronation Park from the side of the train station, you then follow the walking path until it meets the River Tweed. Turn left to face the Royal Border Bridge and continue until you reach the remains of the Berwick Castle. Spend some time at the castle to read the signs and learn more about its history.

The Royal Border Bridge is frequently used by trains. As I passed from this bridge a few times now, I can tell you that the views are magnificent. If you are coming to Berwick-upon-Tweed from the south of the UK and sitting on the right-hand side (left-hand side for leaving the town), you will be able to enjoy these views too!

Shortly after passing a small hut, walk underneath the bridge and climb up to the main street. To get a panoramic view of the Royal Border Bridge, walk up to the midpoint of the bridge and then return. Turn left before getting into the main road towards Meg’s Mount. Meg’s Mount is another stop of the historic route around Berwick-upon-Tweed which also offers great views of the Royal Border Bridge.

Find out more about Beriwck-upon-Tweed Castle and Ramparts here.

The next part of the route takes you into the town centre. There you can have a quick lunch break or grabbing something to eat at another point of the walk. An important building that doesn’t go unnoticeable is the Town Hall at the other end of the street.

After passing the town hall, turn right into Hide Hill road and continue straight until you arrive at the Quay Walls. Turn left and follow the route until the point the walkway forks. Keep on the right-hand side and continue walking along the medieval walls until the Main Guard House. Coxon’s Tower should be the next point of interest with views (if you are tall enough) of the North Sea. After that, the Plommer’s Tower/Fisher’s Fort section follows. Can you spot the Lighthouse from there?

To get back to the original path, get back the same way, pass again under the bridge, return to the section that the road forks and follow the other path that takes you to the King’s Mount. Note that there is a short-cut along the Pier Road which takes you by the tennis club, through the playground area to the King’s Mount. This is the route I took, but I find it very difficult to retrace it on Google Maps, so follow it on your own risk.

After reaching King’s Mount, continue on this quiet path overlooking the North Sea. At some point, you will reach the Gymnasium Gallery. It houses temporary exhibitions that may worth checking out. (On the Quay Walls you can also find the Granary Gallery.) Next to the gallery, you can find the Berwick-upon-Tweed Barracks and Main Guard.

The Berwick-upon-Tweed Barracks and Main Guard is the place to go to learn more about the history of the area. It is managed by the English Heritage and it houses the ‘By Beat of Drum’ exhibition, the King’s Own Scottish Borderers Museum and the Berwick Museum and Art Gallery. In the summer, the place closes daily at 6 pm, so by the time you reach this part of the route, there should be enough time to see the exhibitions. There is an entrance fee.


Find out more about the Berwick-upon-Tweed-Barracks and Main Guard here.

Once you are done with the museums, exit the complex and turn right. Follow the road and pass by a narrow bridge to find yourself below the path you were walking before. Keep following the road until you reach the beach. En route, you will pass Magdalene Fields Golf Club. At the car park of the beach, follow the small path to get to the sea level. Have a short break by the sea before returning to the car park.

From the car park, head west and right before the end of the road turn left. At some point, on your right hand side should be a small opening which allows you to get into the park were the Lord’s Mount is. Walk around the ruins and see the nearby Bell Tower. This is the last stop of the walk. Once you are ready to leave, head to the main road (Northumberland Avenue) and turn left. Continue straight until you reach the train station.

P.S. This is a walking route, I created on the spot. I hardly prepared for this day trip to Berwick-upon-Tweed. Instead, I was following all the places of interest I found on Google Maps.

A weekend in Callander, Scotland