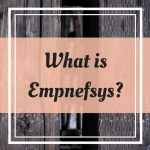 In its simplest form, “Empnefsys” is the Greek word for inspiration. More specifically, the exact Greek word is “émpnefsi”  or “émbnefsi” written as ‘Έμπνευση’. The word derives from the Hellenistic word ‘ἔμπνευ(σις)’ pronounced “émpnev(sis)” that comes from the verb ‘ἐμπνέω’ (ἐν + πνέω), pronounced “empnéo” (en + pnéo). ‘ἐν’ is a preposition that means in, on or at and when combined with certain letters becomes ‘ἐμ’ (like the case above) or ‘εγ’. The second word, ‘πνέω’, means blow. So, from what is written, “émpnefsi” means blow in/on/at. That’s roughly correct, as the original meaning of the word is “blow into”.

Are you still with me? Great. It’s not complicated I promise. Today’s meaning of the word as used in the name of the blog comes from the French word inspiration, and it is a semantic loan to the Greek language.

(Hint: If you don’t know what a semantic loan is, look at the BONUS section)

Why Empnefsys and not Inspiration then?

Easy. As you can imagine, I speak Greek, and I simply chose this word because I want to promote the Greek language. As you can see, I didn’t use the exact word that it is used today (émpnefsi), but I used a more archaic version of it (émpnefsis). That’s because: 1) I think it sounds better next to and (see empnefsys and travel) and 2) I wanted to use a y instead of an i, and it simply looked better to my eye that way.

Well, you are right I should use an i, as this is how the word is written when Latin characters are used. BUT I wanted to use y because of its history. What? Do letters have a history? Of course, they do! Don’t worry I’m not an expert. I don’t know the history of each letter of the alphabet, it just happened to know where y comes from and I wanted to use it.

Can you guess what’s special about y? Time’s up! Y/y originates from the Greek letter Υ/υ Ypsilon (ύψιλον), and it is still referred to as the “Greek i” in many languages like French (i grec) or Spanish (i griega) or it is called /ˈʏpsilɔn/ like German.

Are you a bit lost? Don’t worry. I am summing up what I wrote above here. Empnefsys is the Greek word for inspiration. Greek is my native language, and therefore I want to promote it. Lastly, I chose to write Empenfsys instead of Empnefsis or Empnefsi as this was a way to put in the word the letter y that is of Greek origin.

Read all of my Empnefsys articles here.

As I promised above, here it is, the explanation of semantic loan or more accurately semantic calque. Calque (comes from the French noun ‘calque’ and means “tracing; imitation; close copy”) is a word used in linguistics and means loan translation. There are different types of calques, and one of them is semantic calque that basically means borrowing the semantic meaning of a word from another language. A simple example (as given in Wikipedia) is the word mouse. Nowadays, mouse not only refers to an animal ? but also it refers to an electronic device: the computer mouse ?️. The computer mouse has taken its name because it resembles the actual animal. Following this, many other languages have broadened their definition of the word mouse (as an animal) to include the new definition (as a computer device).

I created this article with the help of online dictionaries, articles about word origins and Wikipedia. I cite below their URLs (they were accessible the day I have published the article – for the exact date see above).

P.S. If you didn’t realise, this was my first post! Horray!!! ? Thank you for reading it! What do you think about it? Let me know in the comments. I accept good, bad comments and anything in between but not rude ones. Also, I accept comments in Greek, English, French, Spanish and any other language as long as I can translate them with Google Translate! ?