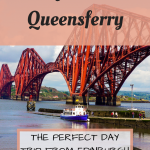 Let me set the scene: It is a sunny summer day in Edinburgh and you want to go somewhere near the sea to enjoy your day! You prefer to go somewhere close, that is reachable by bus or train. You also want to find something there that has some photographic interest. Mmm… let me think a bit! Yes, you should go on a day trip to Queensferry, South Queensferry to be exact!

Queensferry is a town west of Edinburgh. It is separated in North and South Queensferry by the Firth of Forth. It is most known for its three bridges that connect the two sites of the firth (a narrow inlet of the sea): the Forth Bridge, the Forth Road Bridge and the Queensferry Crossing. The most popular bridge is the Forth Bridge and if you have already been to Edinburgh you may have seen it on postcards. It has a bright red colour and it’s used by trains. The bridge was opened to the public in 1890 and since 2015 it is a UNESCO World Heritage Site. To add to the cultural significance of the bridge, in 2016 it has been voted as “Scotland’s greatest man-made structure” and you can find it on the Scottish £20 note.

How to get to South Queensferry from Edinburgh

The quickest way to reach South Queensferry from Edinburgh using public transport is by train. The closest train station is Dalmeny and there are frequent ScotRail trains from Edinburgh Waverly and Haymarket stations. The train trip lasts about 20 minutes. From the Dalmeny train station, you will need to walk for another 10 minutes to reach the shore. The route is signposted and passes from a park and under the Forth Bridge. At some point, you will need to descend a set of stairs.

Another way is to get there is by bus. Bus 43 towards Queensferry departs from different places in Edinburgh including Princes Streets. Then, you can get off at either Dalmeny station and follow the directions above or get off at The Loan, a couple of minutes away from the High Street. The total bus trip should last between 35 and 40 minutes (depending on where you get on/off the bus).


Things to do on a day trip to Queensferry

Take a boat trip around the Firth of Forth

The most popular activity in Queensferry is taking a boat trip to see the three bridges from the water (1.5 hours). There are two companies that offer similar excursions and add-ons: Forth Boat Tours and Maid of the Forth. Sailings are not very frequent so you may want to check their schedule in advance. All boat tours depart from Hawes Pier. Apart from the bridges, cruises can make a short stop at Inchcolm Island or pass by the Blackness Castle (usually 3 hours long). During the summer, you may be able to see some seals along the way too!

Inchcolm Island houses Inchcolm Abbey, one of the best-preserved medieval monastic buildings in Scotland. During the WWI and WWII, the island had a defensive purpose and you can still see some of the fortifications today. The island is managed by the Historic Environment Scotland you can only access it by taking one of the Firth of Forth boat cruises.

Through the years, Blackness Castle had different uses. Starting with a royal castle in the 15th century, then a fortress and a prison, later an ammunition depot and recently it starred in the Outlander TV series. Another interesting feature of the castle is its shape, which looks like a ship ready to get into the water. The cruise does not include a landing at the castle, but as the castle is open to the public, you can easily plan another short excursion there from Edinburgh.

Soak in the view of the Forth Bridge from different viewpoints along the coast. Follow the Newhalls Road, get into the High Street, before following some stairs on your right-hand side that take you to the shore. From there, head to the South Queensferry Harbour for more amazing views! Below, you can find some suggestions for things to see and do along the way.

Apart from admiring the picturesque houses you, don’t forget to visit some of the cute independent shops and cafes you will encounter. Stop for a quick lunch at the Manna House Bakery & Patisserie, opt for a dine-in service at The Boat House, have a tea break at The Little Bakery or enjoy an ice cream at The Little Parlour.

This little museum has many interesting exhibits about the history and traditions of the area, as well as information about the construction of the Firth of Forth bridges. Entry is free, but donations are welcomed. Note that although the museum opens between 10 am and 5 pm, it closes for lunch.

Find out more about the museum here.

Rosebery Hall is a historic building in Queensferry. It served different purposes over the years from a medieval town hall in the 16th century to prison. In the early 18th century a member of the parliament offered to fund a clock for the Tolbooth Tower. In 1887 that clock was replaced with the current Jubilee Clock, which you can see while walking along the High Street.

South Queensferry Harbour is a great place to enjoy some views of the Firth of Forth. Depending on the time of the day you may find the boats parked there floating in the water or being stuck in the sand. Take a break at one of the benches before heading back.

Sample route to follow that covers all the places of interest mentioned above.

P.S. Did you know that it is possible to walk from Queensferry to Cramond? There is a lovely walking trail (~7km) along the shore that connects the two. It passes from many beautiful viewpoints, the Barnbougle Castle and Dalmeny House (occasionally open to visitors). I didn’t find time to do the walk, but I did go for a day trip to Cramond.

3 Days in Aviemore, Scotland: An itinerary for nature lovers without a car