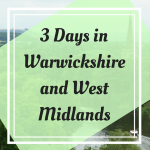 Today I am in Stratford-Upon-Avon! It’s past 8, and Christos and I are waiting for a table to eat dinner! (A busy restaurant in the middle of a motorway)! Never mind, today was a FULL day with lots of beautiful places! This is the first stop of a backpacking trip across Warwickshire and West Midlands for 3 days.

Travelling with: My boyfriend, Christos

We got on the train at 8:39 (that’s the second time I arrive 1 minute before departure time within two weeks – I need to improve on that!) at Marylebone station. We changed train at Dorridge, and just before 11, we arrived at Stratford-Upon-Avon!

For that, we bought the tickets in advance even though we had a 2 for 1 voucher for buying tickets at the entrance. The reason we did that, is because I wanted to avoid the queue. But there wasn’t any (only a few people in front of us), and we still had to queue the same line to get our tickets scanned. Hopefully, the price difference was small (we got two student townhouse passes instead of 1 full adult pass). The only queue we had to wait today was for entering the actual Shakespeare’s birthplace home from the main exhibition about Shakespeare. In general, the place was a bit a crowded, but not as much as I expected it to be, which was good!

MAD: Mechanical Art and Design. A nice small interactive museum. It was lovely to see all those small mechanic constructions move all over the place.

Our next stop was Shakespeare’s New Place, the house where Shakespeare lived with his wife, Anne Hathaway. The staff there (and all across Shakespeare’s houses) was very friendly and ready to explain anything you ask them. The house also had a lovely garden – a great spot for photos!

Then, we headed to Hall’s Croft, the house of one of Shakespeare’s daughters. We spent some time there and then we continued to Holy Trinity Church.

Opposite Hall’s Croft is Holy Trinity Church, where Shakespeare’s grave is situated along with the graves of his wife and daughters. To get the part of the church, where the grave is, we paid a small fare.

15:15 Tower of the Royal Shakespeare Company

That’s when all those magnificent views started to appear! The river on one side, the town on the other!

Since we were a bit ahead on the schedule, we decided to rent a boat for half an hour. We could also go on a boat cruise on the River, but the first option sounded more fun!

Last attraction of the day is the small “museum” about the Tudors. Tudors reigned the kingdom of England, Scotland, and Wales between the 15th and 17th century. During that time the plague was at its peak, Shakespeare was born, and the famous Henry VIII reigned the country.

That’s the time when the majority of the museums/houses close. So, before heading back we stopped for some ice cream!

We took the bus to take us to the hotel that we would spend the night! We stayed at Holiday Inn Express Warwick – Stratford-Upon-Avon [AD]. The location of the hotel was convenient for us as it was between today and tomorrow’s destination.

That was all for today! The first destination is crossed off! Next is Warwick and the famous Warwick

We had two options: either take the bus at 9:10 or the next at 10:10. Buses are not frequent on a Sunday, and I thought that it would be better to arrive a bit early than later on when it would be more crowded!

By that time we had arrived at the castle after wandering for a while in the empty streets of Warwick. We waited until 10:00 to enter the castle. The place exceeded my expectations! Definitely, a whole day is needed to explore every detail of it! I initially had planned 2-3 hours, but we stayed there until 14:15 and yet we could spend more time there. We could have lunch, watch more shows, go to one of the free tours of the castle, go up to the boathouse or go to the Dungeons (although not included in the ticket). What we did, was to visit the castle’s interior, walk around its grounds and watch a couple of shows.

Buy your ticket from AttractionTix by following this link [AD] and get 50% off the Family Ticket.

Since we just missed the bus, we decided to have lunch at Warwick until the next bus! The streets were also filled with people as there was a folk festival for the weekend. Just before living we decided to visit the Market Hall Museum.

We were at the bus stop in time to go to our next destination for the day.

What a lovely small town! We decided to spend an hour there (until the next bus). We also had the option of leaving after two hours, but we said we would only do that if we find something interesting to do! Well, what we did here was walk in the Jephson Gardens for half an hour. The gardens and the River Leam passing by were so beautiful! After approximately half an hour we went to find some water. Luckily, we just in time before the Sunday closing time. That’s 4:30 pm for them. After that, we headed back to the bus stop.

That was our last bus ride for the day with destination Coventry.

Christos’ cousin was waiting for us there. He showed us the sights of the city centre including the Holy Trinity Church and Coventry Cathedral and told us the history of Lady Godiva Statue.

Later on, we had an early dinner in a Latin American restaurant. Then we headed towards the train station as there was nothing else to do after that time.

We waited for the train to arrive that would take us to our final stop of the day. What I didn’t like in Coventry were the many construction works around (the only building that seemed to have just finished a good renovation was the train station)! Maybe, if I revisit it in a few years, I will get an entirely new impression of the place.

We checked in at our hotel after walking 15 minutes from the train stain! We stayed at Holiday Inn Express Birmingham-Snow Hills [AD]. From a first view, Birmingham seemed to be a modern city. That’s the way it should be if you ask me since it is the second-largest city in the U.K. in terms of population.

After we had breakfast, we went to the train station to get the train to Bourneville.

That was the highlight of the day! A morning dedicated to the world of chocolate! The best moment was when they gave us a cup of melted chocolate with toppings of our choice (I chose crunchies and chocolate). The main theme of the exhibition was the story of chocolate and the company itself. Then, it featured chocolate production and a thematic ride with cocoa beans! At the end of the tour, we entered the largest Cadbury shop. Our ticket also included a 4D cinema, so before leaving, we went there. At that side of the building, there was a playground and a small room with the history of Bourneville!

Overall, it was mmm… sweet! At first, I had planned 2-3 hours, but we actually were there for 4 hours! That doesn’t include the time it took as to go there from the train station (the signs were ambiguous at a few points) and back!

We had any time off-peak return tickets, and a train passes every 10 minutes, so no need to worry to miss the train.

We had lunch at a place near the Birmingham New Street station. Next, we walked to the city centre and arrived at the Millennium Point, an educational space of the Birmingham City University that also houses a science Museum.

At that time I was a bit tired of carrying my backpack for three consecutive days, so I didn’t enjoy the museum as much as I would normally, but it was fine since Christos’ did! We stayed there until it closed at 5 pm.

We had some time, so we went to the shops close to the train station until we had to go. Some shops closed at 6 pm some at 7 pm and others at 8 pm.

The train to London was leaving at 8:07 pm. On the journey back we had some time to relax and reflect on our recent trip.

Finally, after three full days, we returned home. Tired and ready to sleep but with new places to remember!

P.S. I hope you enjoyed this diary. Don’t forget to share with your friends and write a comment for anything you want to mention.

A day trip to Falkirk in Scotland from Edinburgh

A day trip to Queensferry from Edinburgh