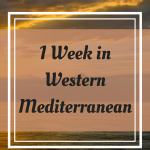 Hello, everyone! This is my first diary. As you will notice with a first glance, it looks like an itinerary. That’s true! You can also use it as a guide for your trip. However, the tone is more personal. This one is about a cruise in the Mediterranean Sea and more specifically the western part of it that was our family holiday in 2011. The unique of this holiday was that we spent more time on the cruise ship than actually exploring. The good thing is that we visited many new places. Below you can find how we spent our time in each destination. If you want some hints and tips about planning a cruise, read this: ‘A beginner’s guide to cruises’.

Note: The quality of the photos below is not the best. That’s because I wanted to keep the post more authentic. So, I included only photos that I had taken when I was there with my old camera (Sony DSC-W55).

1 Week in Western Mediterranean: The Details

Travelling with: My mum and my brother

Day one means going to the airport. The ship departs from Malta, so we take a plane to get us there.

Upon our arrival at the airport, we gathered with the other people from Cyprus that would take the same cruise and a person sent by our travel agent was waiting for us to take us to the port. Within a few hours, we were on the ship and ready to go. We stayed in an inner cabin, and yes, it had no windows. The main reason was the price. If we could travel one week before, we could get for the same price a cabin with a balcony! Never mind, we didn’t spend a lot of time in our cabin, so it wasn’t a problem.

A little bit more about the cruise ship we travelling:

The ship had 18 decks (our cabin was on deck 13 – if we got another type of cabin it would most probably be on a lower level) and it could accommodate around 4 300 passengers. It had swimming pools, restaurants, shops and many bars and lounges. Name: MSC Fantasia.

Today’s destination is Messina in Sicily. We had a morning to spend there and enjoy the city.

This is the time we disembarked from the ship. We actually arrived there from 7 am. We had until 2 pm to wander around. There weren’t many things to do there, so we walked in the nearby Piazza Cairoli and Piazza Duomo. We passed by Fontana del Nettuno too. If we had more time we could also visit other interesting places, like going to Taormina, another beautiful city in Sicily or going to Mount Etna, the highest active volcano in Europe. 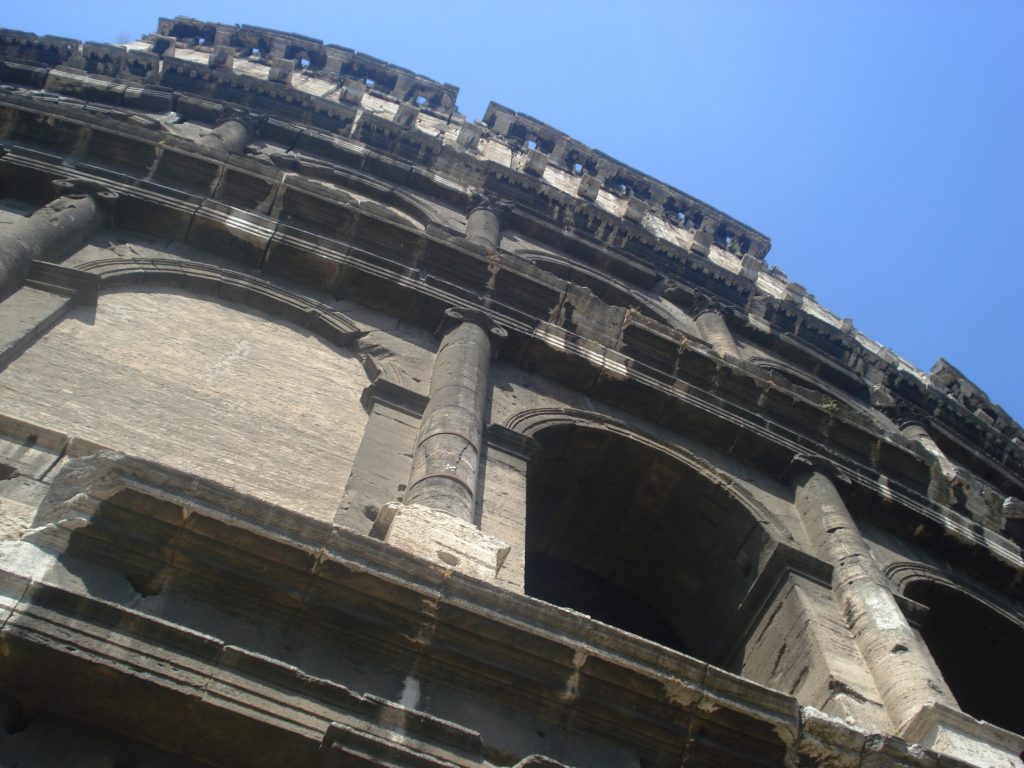 The first destination is crossed out, but not the first country! We are still in Italy. Today we disembark at Civitavecchia, the closest port to Rome.

This morning the alarm went off at 6 am to be on time for the shore excursion we decided to go. Another option, we had was to take the return bus to Rome. We decided the organised tour so that we had a guide to explain to us a few things. Besides, we would be able to see more sights if we were on a guided tour than alone, especially when considering the fact that we had only a few hours there. Here I just list the places we’ve been (for a full itinerary for Rome click here – we returned five years later!): Colosseo, Piazza di Spagna, Pantheon, Fontana di Trevi, Piazza Navona and Piazza San Pietro. 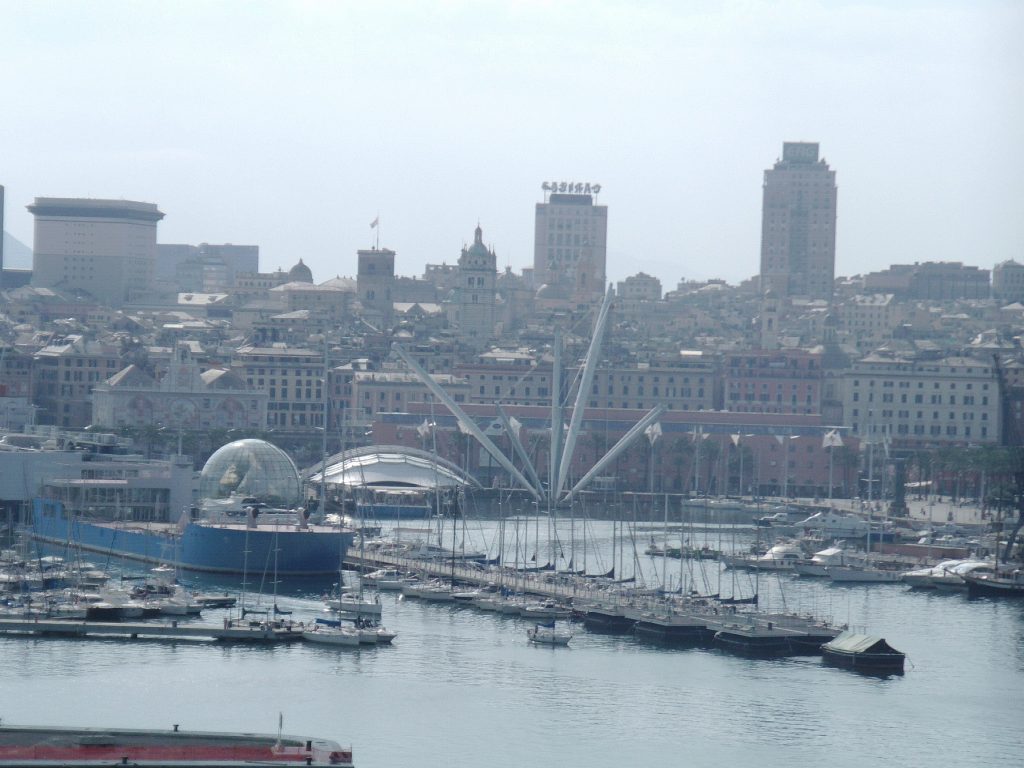 Yeap, still in Italy! This is the official departure and arrival port of the cruise ship we are on, so today a lot of people leave and many arrive. The port is in… Genoa!

We arrived in Genoa at 9 am, and we had until 6 pm, plenty of time. Our first stop was the old port of Genoa Porto Antico. The Acquario Di Genova, the second largest aquarium in Europe (according to Wikipedia), is situated there. Biosfera is also close by, a botanical garden in a sphere. We went to these two attractions and later on, we took a train ride around the city (not the most comfortable means of transport). If you had more time to spend, we could go to the other attractions in Porto Antico like Bigo Ascensore Panoramico (a lift to admire the beautiful view) and Galata Museo del Mare (a sea museum).


There was a ferry that took you from the port to Porto Antico. That was fine, we took it to take us in the city centre, but we hadn’t checked when the last service was. So, when we decided to return, we realised that we had missed the last one and we had to go back on foot. After asking a few people for directions we made it just in time for departure. 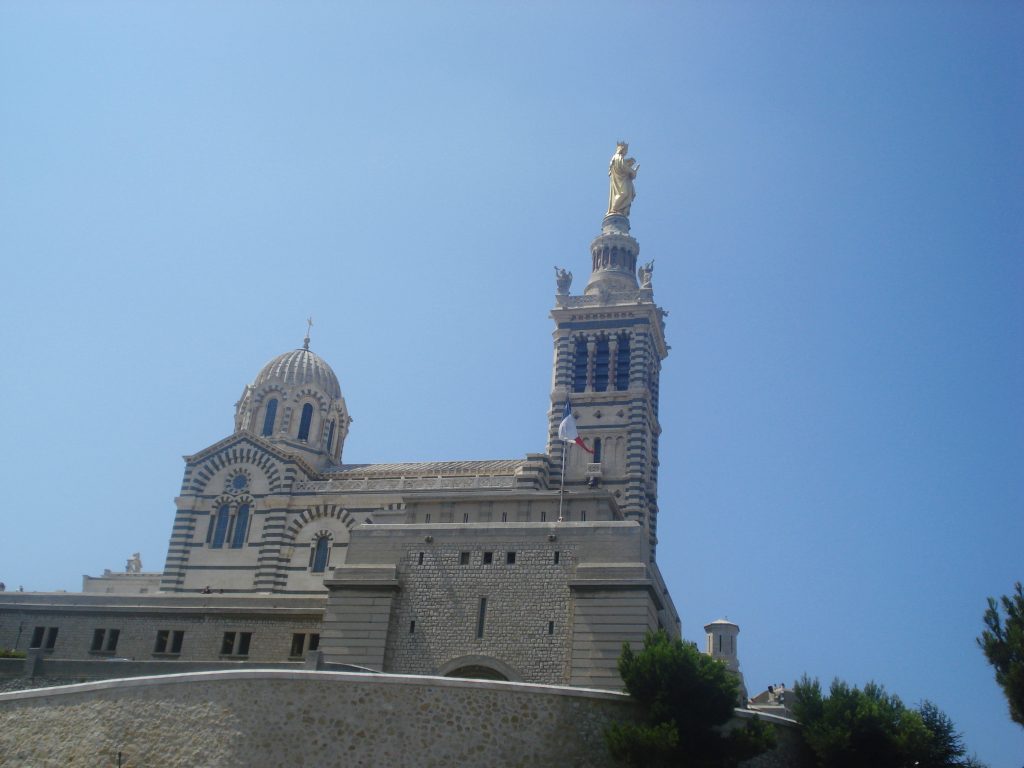 Good morning France! What a beautiful day today, Marseille port is on our way!

We walked at the old port, Vieux Port, and then we headed up to Notre‑Dame de la Garde to admire the city. We took a train to take us there that also allowed us some time before taking us back. This is how we spent our day in general. In Vieux Port, there was a lovely market with antics, arts and crafts and stuff like that. In the afternoon, before returning to the cruise ship, we went for shopping. At 6 pm we said goodbye to this picturesque city. 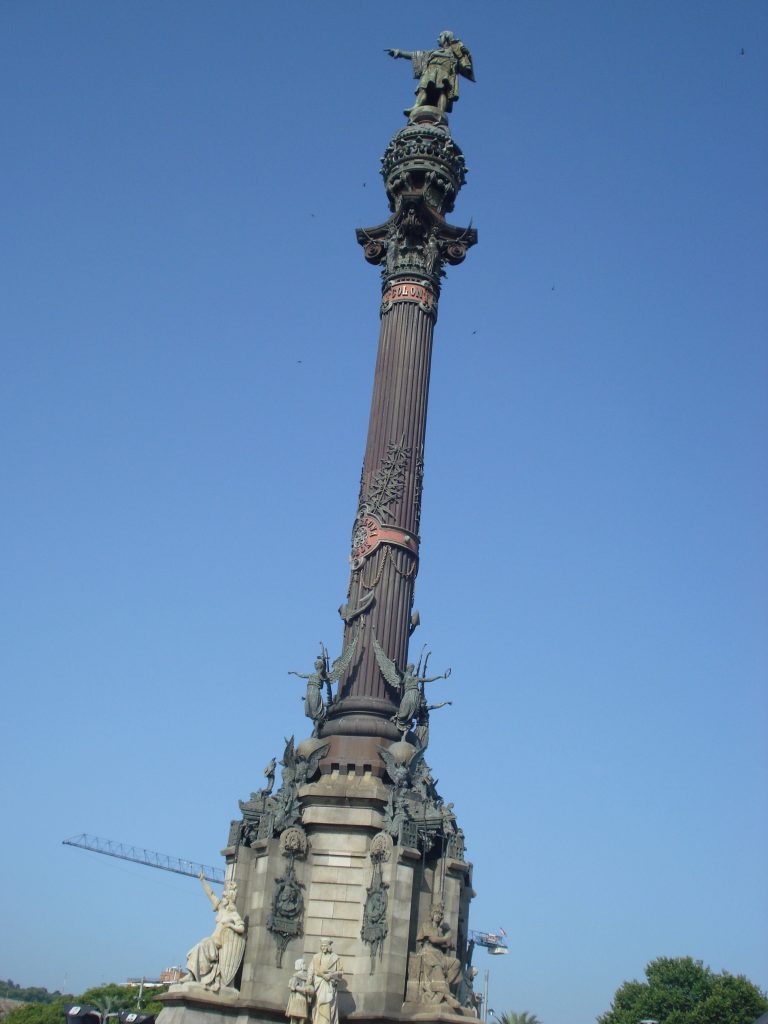 I’m thinking of a letter! Can you take a guess? It’s B for Barcelona, today’s destination!

Only a few hours left before going back (the cruise ship departed at 14:00). Due to the limited amount of time we had and the endless things that we could do there, we took a hop-on-hop-off tour bus. (Read the pros and cons of taking hop-on-hop-off bus here). We had a choice of 3 routes, and we chose the one that toured the old city, Ciutat Vella. We got off the bus at Plaça de Catalunya, and we strolled La Rambla. Next, we continued with the tour bus, and at lunchtime, we headed back to the cruise ship. We liked Barcelona so much that we decided to come back next year when we would have more time to wander around this modern city. For the full itinerary click here.

To get to the city from the port, we took the bus service offered by the shore excursion desk as it was not a walking distance. 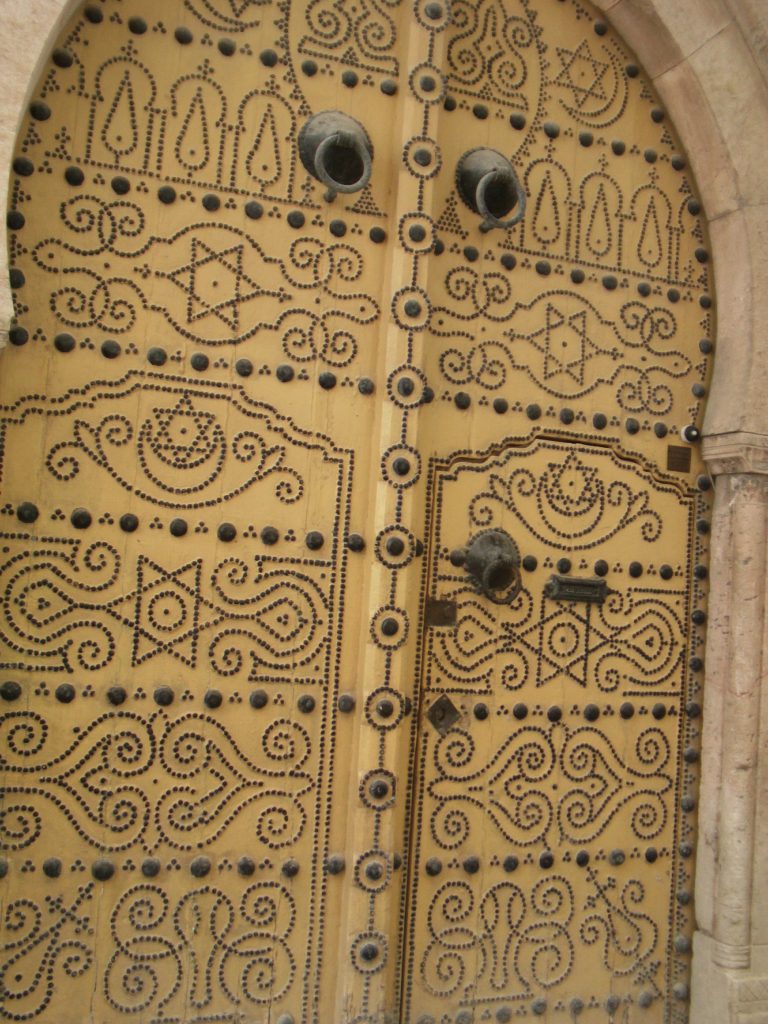 A couple of months before taking the cruise we’ve been told by our travel agent that due to the political situation in Tunis, passengers wouldn’t be able to get off the ship until further notice. That further notice came a week before going on holidays and said that passengers could visit Tunis as planned. So, Tunis is in for today!

We were ready to explore the different! The reason I’m saying that is because of their culture that’s different than what we’ve been exposed to so far. We took a shore excursion as we thought that it would be better to explore Tunis this way. The one we chose was about the Souks of Tunis. We didn’t know what a souk was, but it was the one that sounded more interesting to us, so we decided to give it a go. As it turned out, a souk is a set of narrow streets full of shops and small boutiques. Street vendors were all around ready to bargain for their goods.


At the end of the tour, and before returning to the cruise ship, we got on a camel (my brother and me) to take some photos (upon paying a small fare of course). As I said above, Tunis was different. 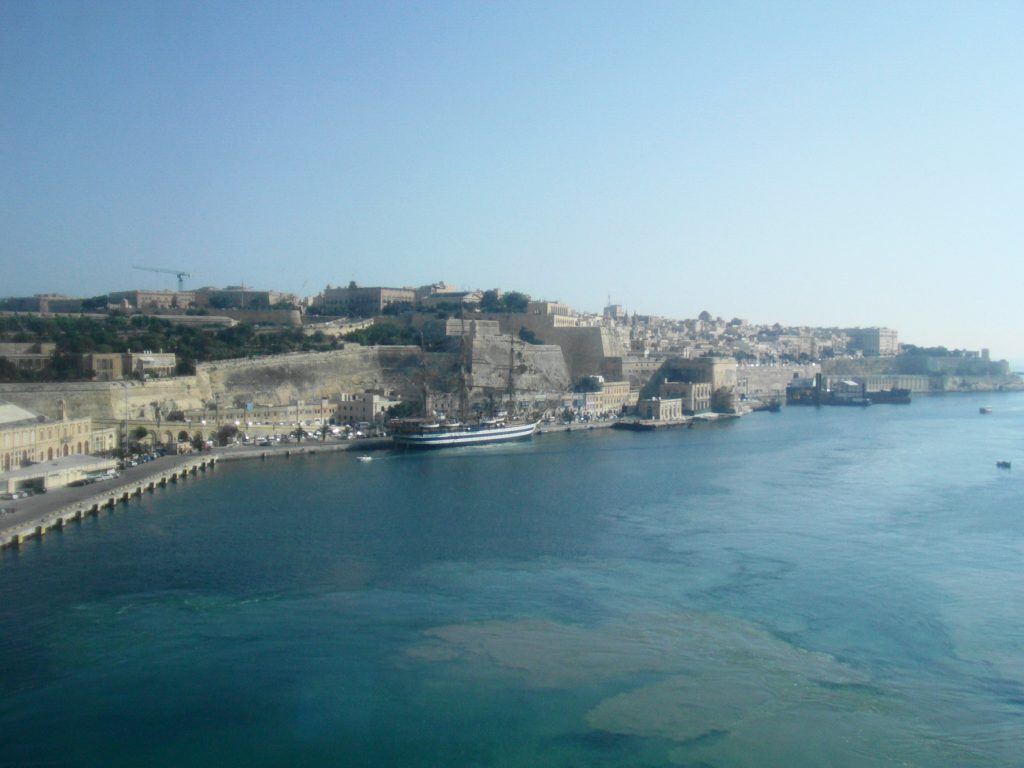 Last day today! 🙁 We are back in Malta!

After disembarking from the cruise ship, we gathered at the port with the other people from Cyprus as we did the first day and a person sent by our travel agent was there waiting for us. Our flight was in the afternoon, so we had some time to see Valletta. We would have a proper tour of Malta but, what we had at the end was a transfer to Mdina, the old capital of Malta. We stayed there until it was time to go. That was a bit disappointing as we had time to see more (like St John’s Co-Cathedral), but we didn’t. I don’t say that I didn’t like Mdina, I just say that the 2-3 hours there were more than enough (and it was hot!). Next time I’ll go there, I would like to visit the other Maltese islands: Gozo and Comino.

I enjoyed my time on the cruise ship, although it would be better to go with more friends. That was my first cruise of this kind, so next time I go to one, I’ll be more prepared.

Choosing a cruise that year, meant that we could relax a bit and also explore new places. I would definitely want to go again. It’s been a while since then. I would like to go on a cruise to Northern Europe, and I hope that I will be able to go soon. Until then, I have many other itineraries and stuff to share with you. So, don’t forget to check back soon!

P.S. Breakfast was my favourite moment as every morning we had a different view from the large windows of the buffet room! I also liked the wide variety of food we had!

1 Week in Brussels and Amsterdam

My first travel conference and a solo trip to Riga