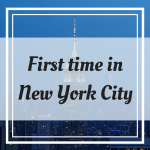 First time in New York City is the first part of my 2-weeks long trip to the USA. You can read more about it here.

Check out a detailed itinerary for this trip here.

It’s 8 am on a Sunday morning, and we are going to the airport to catch our flight to Newark Liberty International Airport (EWR). It’s is going to be my first transatlantic flight and the first time that I travel on a Boeing 777 plane. Can’t wait! A few hours later we are in crowded Times Square! We walk for a while, visiting a couple of shops before entering Hershey’s Chocolate World, because what’s better for dinner than a peanut butter cookie?!

Morning alarm today, but due to jet lag, we have no problem waking up on time! We want to visit the Empire State Building early in the morning! We made it! It’s 8:30 am, and we are inside and walking past the “empty” corridors of the building. To give you a feeling of the queues there were four security lanes, and we didn’t have to wait for more than two minutes. Once we exit the lift on floor 86, we see for the first time the city from above! The view is just amazing. We also visit the top deck (level 102), but there is nothing special up there and not a dramatic difference in the view. I don’t think it worths the extra money.

Next, we begin a rather long walking tour across New York. We start from Midtown, pass by the Flat Iron Building, visit the High Line, go to the Chelsea Market, then to the Washington Square Park. After that is the Tompkins Square Park, and we finish at the Union Square before walking back to the hotel! The route was designed in a certain way so that we can pass from interesting dessert shops along the way! Oh and we found a lovely spot for pizza!


In the evening, we have a booking for the Top of the Rock, at the Rockefeller Centre. It’s sunset time, so the place is very crowded, but I managed to take a few good pictures including the iconic photo of New York, where the Empire State Building stands proudly in the middle of the frame. Since our visit is during sunset, we can have both a day view and a night view of the city. I can’t decide which is my favourite! Both times provide amazing views! When it’s time to leave, it also time for most people to go so there are long queues for the lifts.

Happy Birthday, Mum! 🙂 Today we walk to the Grand Central Terminal, then we pass by the Chrysler Building, stop for some mini cupcakes and continue our way to the United Nations Building, before having a stop to eat them.

Our next stop is the tramway to the Franklin D. Roosevelt Island (the only way to get there), that is between Manhattan and Queens. Once we arrive there, we find out that there is a bus that makes the loop of the island, but unfortunately, we don’t have time for that. Instead, we walk along the south side towards the Franklin D. Roosevelt Park, and we take many photos. The place is lovely; there is the Manhattan skyline on one side and the park on the other. Also, there is almost nobody there, compared to the other attractions we have visited so far. We buy a bottle of water, and we leave the island quickly before it starts raining.


To go to our next stop, we pass by the Tramp Tower and the 432 Park Avenue building, the highest residential building in New York. We don’t manage to avoid the rain, but fortunately, we are only a few minutes away from the Museum of Modern Art (MoMA). It is passed two, so we are looking for something to eat in the museum. We decided to try the Cafe 2 which despite its small portions, which don’t reflect the price, has nice food! Then we start our museum exploration beginning from the top floor, and we are going downwards. There were interesting exhibits at all levels, and although I’m not an arty person, the vagueness of modern art makes me wonder about the artworks.

The plan said to go back to the hotel, but instead, we enter a couple of shops on 5th Avenue, and so there is no time to return. Hence, we go straight to our final activity of the day, which is a sunset cruise. We booked the premium seats, and even though I was wondering if they worth the extra money, the answer proved to be yes. There aren’t many people on the upper deck, so we can easily move around to take pictures, without obstructing anyone’s views. Before returning, we pass by the Statue of Liberty, see the Financial District from a different angle, pass under a few bridges, and admire all those buildings that surround us.

Happy July 4! Or at least that’s the spirit here! Today we get into to the New York metro for the first time and get off at 86 Str Lexington Av to visit the Metropolitan Museum of Art (Met). We browse many galleries, including the Heavenly Bodies exhibition which was fascinating; the Cypriot gallery (which I was unaware of until I went into the gallery and remembered that when I was 15, we were discussing at a History class that there is a Cypriot gallery here) and the magnificent Egyptian galleries. We try to visit the roof garden but it is closed due to the weather, which was ok if you ask me. So, decide to have lunch at the American Wing cafe in the museum: expensive food and nothing special.  We spend about four hours in the museum before agreeing that it’s time to move on!

Our next stop is Central Park! The plan is to start walking all the way to the other side of the park going towards the city centre. On the way, we stop to rent a rowboat in The Lake. Guess what? It’s easier than it seems. The oars are locked on the boat so they can’t fell off which is very convenient if you are a beginner like me. Then, we are walking to Times Square to have dinner. We choose Planet Hollywood, which unfortunately didn’t meet my expectations. Little food, despite the money paid and the reputation that American style restaurants have big portions. After that, it is time for the 4th of July fireworks, but since we don’t have a vintage viewpoint, we decide to go to Junior’s and celebrate Mum’s birthday with a piece (or two) of cheesecake!

Today the day is dedicated to the Financial District area. We start with the One World Observatory at the One World Trade Centre. The observatory is situated on the 100th floor, but the lift takes us to level 102. There we are shown an introductory video, which was unexpectedly good (especially it’s finale). Then, we descend the stairs for a staff welcoming intro and finally, we descend another floor for the observatory. The views are amazing! We can see the Statue of Liberty, the Ellis Island, the Brooklyn Bridge and the rest of Manhattan, with the Empire State Building standing tall in the distance. It is a sunny day; hence we have great views but, also, an unavoidable reflection on the glass windows, which makes taking clear photos a little bit more difficult.

After that, we visit the 9/11 Memorial: the two pools that were built on the place where the twin towers once stood. Then, we go underneath them to the 9/11 Memorial Museum. The museum is very touching, especially the Historical Exhibition. No photos are allowed in there, and we can concentrate on learning more about that day. I went in with the knowledge that two planes crashed on the twin towers on the 11th of September 2001. I came out knowing so much more. Important details that I was unaware of: the planes were four in total, they were commercial planes, there was one that crashed in Pentagon.


Next, to relieve the atmosphere, we visit Wall Street and walk along its small streets (compared to the others street we’ve been to), towards Brooklyn Bridge, which we want to cross. After going in circles, we finally manage to find the pedestrian entrance of the bridge. There is hardly space to move. This state continues until we reach the point that the bridge reaches its full height. At that point, most people return, and after that, it is more comfortable walking here. Half an hour later, we arrive at Brooklyn and due to lack of time (as usual) we don’t have time to do anything there apart from returning, but this time we choose to use Manhattan Bridge. The other bridge was much quieter regarding the number of people there. However, trains were passing next to us, which means that this bridge is not at all quiet.

At the other end of the Manhattan Bridge is the Chinatown where we pause to have something to eat. Before taking the metro back to the hotel, we pass by Little Italy. Again we are in a hurry because we have a musical to go! It’s 8 pm, and we are already seated on the penultimate row at the central balcony (the only seats that we could afford) at the St James theatre on 44th street to watch Disney’s Frozen. Great performance! The best part of it? I knew the story (I had watched the movie a few years before) and I knew some of the songs!

Today is our last full day in New York. Initially, I was planning to spend our morning at Governor’s Island and then go shopping. However, it is raining, so there is no point in going to the Island, and instead, we go full day shopping. In the evening, we visit Times Square one last time!

Did you notice something that’s missing from the above? I do! It’s doughnuts! I had many doughnut shops on my map, but we didn’t have the chance to visit any of them! So we decide to go for a morning run for doughnuts. I find one doughnut shop that opens early; it is 20 minutes away by bus, and it’s very close to the Flat Iron building. We got on the bus, and in a few minutes, we were there! It was Saturday morning, very little traffic! Great, we have extra time! We buy the doughnuts, I take them many photos, and then we walk home. Since our metro cards are empty, we prefer walking than using the bus. We are back on time, I even have time to eat my doughnut, and we depart for the airport. Another city waits for us! Let’s go!

P.S. I am referring to ‘we’ in this article because another person always accompanied me, let it be my mum and my brother or my boyfriend! Each of us followed a slightly different variation of the above, depending on each one’s interests.

1 Week in Orlando: An itinerary for theme park lovers

A beginner’s guide to cruises

5 Days in Rome: An itinerary for first-time visitors