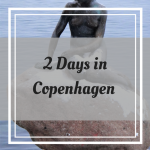 This time of the year1, 2 years ago I was on my way to a spontaneous trip for 2 days in Copenhagen. The spring term2 had just started, and on Friday of week 1, we were on an Uber to go to the airport as quickly as possible. I finished my last lecture of the day at 6 pm, and the flight would depart at 8.45 pm. I had to hurry to get back to my room, get my stuff and leave. This was the beginning of a weekend in Denmark. We were delighted to find out that it was snowing there!

As we had limited time in the city and we wanted to see as much of it as we could, we decided to go on a walking tour. So, we took a free walking tour in English that departed from the City Hall and lasted about 2 ½ hours. We even had a 30-minute break in a warm café – it was freezing and snowing outside (-2oC) – near Nyhavn, a famous harbour in Copenhagen. There we ate something quickly and then we headed out to the snow for more photos. A highlight of the tour was the Little Mermaid, the small bronze sculpture inspired by a fairy tale by H. C. Andersen fairy-tale. We also passed from Amalienborg, the residence of the Danish royal family, where we learnt the reasons that Danish are considered the happiest citizens, despite not seeing much sun and paying huge taxes.

(Hint: it’s because they receive many services for free. For example, free medical treatment).

You can find this kind of (free) tours in different cities in Europe (we took one in Krakow as well), and they are really good if you want something cheap. Although it is named “free”, you are expected to give a tip at the end according to how much you liked it, but again it will cost less than going on a proper walking/sightseeing tour. Another advantage of such tours is that the guide wants to give a good impression to get more tips, so you can assume that he/she will be friendly/funny/etc. My advice on tipping is to give half the amount you would give on a paid tour per person.


In the afternoon, we visited the Guinness World Records Museum, an interesting small museum featuring information about worldwide records. After that, we walked into the city centre and then we returned to the hotel, it was as low as -6oC, the lowest temperature I had ever been to.

On our second and last day, we decided to visit the Tower of Christiansborg Palace for views across Copenhagen. The weather was nice, it was sunny, and everything was covered in snow, and we could have some great views. The entrance to the tower was also free.

Our next stop was Christiania in the area of Christianshavn. The district has its own interesting story with hippies and conflicts between the locals and the government that it’s worth having in mind before visiting.

After that, we collected our luggage from the hotel, and we headed to the airport. The quickest and cheapest way was via train. In general, Copenhagen is an expensive city, but with a bit of planning and a few free attractions in mind, you could see a lot with less. Of course, there are many more things to do. There are many interesting museums and palaces to explore and don’t forget the Tivoli Park, Copenhagen’s most known amusement park. Unfortunately, even though our hotel was 5 minutes away from the park, it was closed for the winter.

Fun Fact: There are more bikes in Copenhagen than people! Copenhagen is a bike-friendly city and, renting a bike is the cheapest way to move around.

P.S. I hope you like this version of posts! It describes where I have been to but also points some ideas for things to do.

Visiting the Blue Lagoon in Iceland: Is it worth it?

5 Days in Rome: An itinerary for first-time visitors